Flogging (see my last post) wasn’t the only way that the nineteenth-century army left permanent marks upon soldiers bodies. It is shocking to today’s sensibilities, but miscreant soldiers were branded. Or, to be technical, forcibly tattooed. Men had been branded with a hot iron in the seventeenth century, as this artifact from the reign of Charles I shows.

But by the nineteenth century, the hot iron had been abandoned. A new device was created to mark the soldiers’ skin with ink, or even gunpowder. The photo below shows an example from the mid nineteenth century. The large, blunt points hint at the pain it caused as a spring mechanism forced these points into the skin. Regimental doctors described the practice as ‘cupping’.1 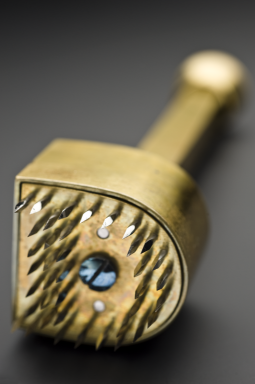 A soldier could also be marked with the letters ‘BC’ meaning ‘bad character’, if he was found to have deserted with premeditation. So why were soldiers’ bodies marked in this way? Until 1829, any soldier could be branded but after this year it was a punishment reserved for deserters. A man who deserted his regiment could, upon conviction by a court-martial, be branded with a ‘D’. In the mid 1840s, over two-thirds of those convicted of desertion were branded. Between 1855 and 1869, between 1,000 and 2,000 men were branded annually. 2

Supporters of the practice claimed that this was not actually a punishment, but a means for the army to prevent fraud. A portion of men were serial enlisters who joined up, then quickly deserted time after time. In the 1860s, it was argued that since flogging for desertion was no longer permitted, it was impossible to tell during a medical examination if a man was a deserter or a genuine fresh recruit. 3 Without the marks of the lash on his back, a man could reenlist as many times as he liked. Desertion was rife among young men and new recruits. 4 Unfortunately for those who changed their mind after enlisting, they had signed over their bodies to the state and escape was difficult. Where evading capture was easy, such as in battalions stationed in North America, desertion was ‘continuous, substantial and seemingly unstaunchable.’ 5

Some shades of political opinion were revolted by the practice of branding. It implied that free men, volunteer soldiers, were akin to cattle. 6 It also echoed practices of slave ownership, where human chattels were marked with an owner’s brand. Yet public opinion was not particularly exercised by the issue of branding, compared to its opposition to flogging. Of course, branding was also strongly associated with criminality. Until 1789, a convicted criminal could be branded on the thumb with ‘T’ for theft, ‘F’ for felon or ‘M’ for murder. 7 While the parallels between criminal and military punishment outraged public opinion in the case of flogging, branding did not arouse the same feelings. Politicians expressed surprise that branding even existed, suggesting that awareness of it was relatively low. 8 Being a shorter and necessarily quieter punishment than flogging, civilians were unlikely to hear the cries of soldiers being marked.  It may be that the earlier cessation of branding in a criminal context meant that it quickly fell from public knowledge. However, flogging endured as a criminal punishment until the early 1830s, 9 which may explain greater public revulsion to it as a military punishment in the nineteenth century. Branding was finally abolished in 1879, just before flogging in 1881.