One December morning in 1845 the ‘loud and agonizing cries of a person apparently in the extremes of bodily torture and anguish’ echoed through the streets of Castlebar, County Mayo. In the town’s barrack a sergeant of the 30th Regiment was being flogged 100 times by the cat o’ nine tails, for the grevious offence of drunkenness on duty. According to the Castlebar Telegraph ‘the shrieks and subduing prayers for mercy of the poor fellow were heard distinctly on the bridge and in the town generally.’ Residents were ‘shocked and astonished’ to hear these wails, and the tone of the newspaper article is suitably horrified. The ‘shocking spectacle’ of gratuitous punishment – heard, vividly imagined, but not seen – was a ‘horrid atrocity’, and a disincentive to any reasonable man to enlist. 1 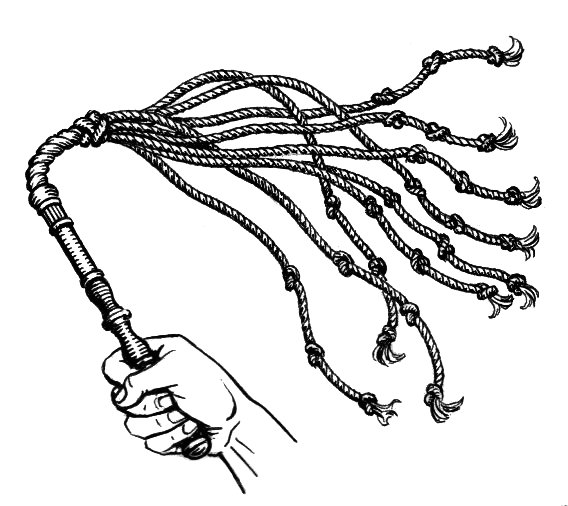 Yet the unfortunate sergeant in Castlebar was relatively lucky, for previous generations of soldiers could be flogged an unlimited number of times for almost any misdemeanour. 2 In 1828, two NCOs from Kilkenny Barracks were sentenced to 1,000 lashes for writing deceitful letters. 3  The army disciplinary code was harsh because bloody campaigns put great strain on officers’ authority. If unquestioning obedience from ordinary soldiers was not forthcoming, swift and brutal summary justice was administered. During wartime, soldiers were subject to capital punishment. On campaign in India, Wellington flogged and hanged men to restore discipline. 4 This was exemplary justice, intended to subdue and terrorise the men in equal measure.

Executions were not a feature of army life in barracks at home; if a soldier committed a capital offence under civilian law, such as murder, he was tried by the civil authority. In 1865, Private John Currie was found guilty of the murder of his commanding officer, Major Francis de Vere, and executed by the civil state for the crime. 5 Yet army discipline at home remained challenging: the boredom and tedium of barrack life encouraged many to drink, and drunken men were often recklessly disobedient. 6 The army faced a dilemma when punishing serious offences, such as violence or foul language directed at senior officers, because of the nature of military service. Until 1847, army service was for life. After this date, a man had to serve 21 years before he received a pension. 7 Only men who purchased their discharge, or were declared medically unfit could leave early. Saving a lump sum to secure their release was beyond the means of most ordinary soldiers, whose pay was very low. Until 1870, when service was reduced to 12 years, an ordinary soldier was, in effect, an indentured servant for most of his adult life. The army was not an ordinary employer; it could do what it wished with enlisted men, from keeping them in dangerous climates for decades at a time to scourging them till the blood ran. Little wonder that the army struggled to raise enough men and that those who joined were often so dissolute.

But there was one other way to leave the army (alive): ignominious discharge. A court martial could expel a man from the army but this was not a popular punishment with officers worried about losing trained men. Transportation in ‘condemned corps’ was a solution that allowed the army to keep a soldier but remove his disruptive influence from the regiment. From 1816-26, delinquents were sent for service overseas to colonies with dangerously unhealthy climates such as West Africa. 8 Later, offenders were transported to Bermuda or Australia. While this may have been a frightening sentence in the early years of the penal colonies, by the 1840s popular opinion perceived transportation to Australia as less a punishment than an opportunity.9 Thus the army authorities faced a problem in implementing a harsh disciplinary code when the ultimate sanction, expulsion, may have the been hearts’ desire of many men.

A flogging in Nenagh, Co Tipperary illustrated just this dilemma. Joseph Randalls of the 64th Regiment was given 100 lashes in August 1842. Randalls claimed that, because he was drunk when he had agreed to join the army, he had been illegally enlisted. Although he refused to take the Oath of Allegiance, he was sent from Staffordshire to Nenagh, where his disposition was not altered by confinement or minor punishments. He endured the flogging with ‘dogged indifference’ and even put his jacket on his back afterwards, reportedly saying ‘Is that all! I’ll be dom’d if that’ll make me a sojur either.’ 10

What made flogging so powerful was the very thing objected to by reformers: it was a punishment designed to humiliate and degrade. Like many of its defenders, Wellington admitted that the punishment was intended to deter observers rather than reform offenders. 11 As the government explained in 1834, ‘The object of the punishment was, to strike terror into others by the example.’ 12 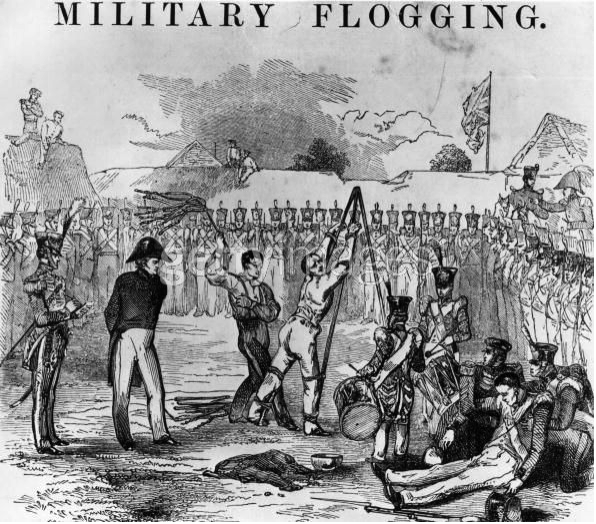 To achieve that end, the army created a flogging ritual. To make the punishment even more degrading, the man wielding the cat was not a proper soldier: cavalrymen were whipped by the regimental farrier, while infantrymen were scourged by drummers. On the day of the flogging, the corps formed a square around a triangle of halberds to which the man was tied. All ranks were compelled to watch the punishment to the end but fainting was common and insensible spectators had to be carried to the rear. The image above shows a man in the foreground, who has been overcome and fainted. To see the flesh torn from a man’s back must have been a gruesome sight. But the gory horror of the flogging itself does not explain why ‘shame’ is a term that both advocates and critics of flogging used time and again. Why was it shameful, a disgrace, to be flogged?

A sense of shame was associated with public whippings since early modern times, when offenders were beaten through the streets. Public corporal punishment was intended to deter the observers and shame the offender in equal measure. However, the numbers of public whippings declined in the course of the eighteenth and nineteenth centuries, matched by a rise in the rate of private whippings, administered  behind prison walls. 13 Thus flogging was inextricably linked with criminality and deviance. The reaction of some sections of the Irish public to the alleged flogging of the Fenian, O’Donovan Rossa while in prison shows how the populace perceived the punishment. The Cork Examiner was horrified that a punishment intended for ‘the low and semi brutalized intelligences that form the bulk of the habitual criminals of England’ would have been meted out to political prisoners. 14 The government knew that the Irish were sensitive to the stigma of convict life, and deliberately treated civilian Fenians as a separate type of prisoner. 15 O’Donovan Rossa was not flogged for throwing slops over the prison governor, but an ordinary prisoner would not have escaped corporal punishment. 16

The English public were equally revolted by flogging, as the reaction of the London populace to General Haynau demonstrated. An Austrian commander, General Haynau was infamous for the brutality with which he suppressed uprisings in Hungry and Italy. He was particularly hated because he had women flogged. 17 On a visit to London in Sept 1850, he was himself flogged by draymen and brewery workers, and had to be rescued by police. The assault was celebrated with a plaque, which hangs in Park Street today. 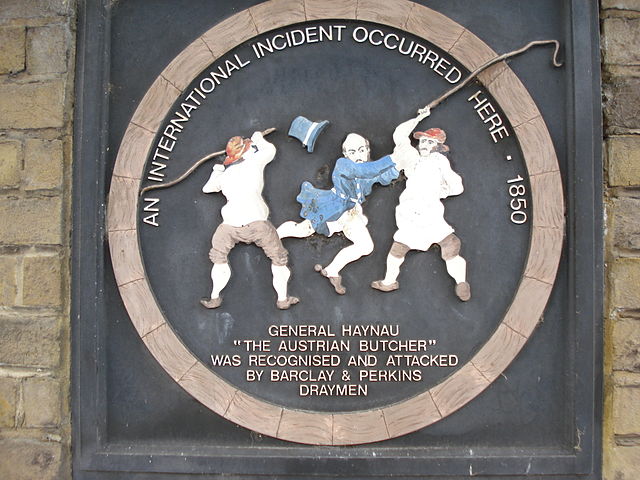 Undoubtedly, it was the flogging of slaves that associated the punishment with the utmost degradation in the British mind. Many soldiers must have had scars similar to this slave’s, particularly before the number of lashes was restricted.

While a similarity between the punishments endured by slaves and soldiers added extra weight to the disgrace of flogging in the army, it is not sustainable to make a direct comparison between slavery and army life. Soldiers were tried by a court martial, but a slave owner could punish or even kill on his/her human chattels at a whim. A defendant in a court martial may not have had the same rights as a defendant in a civil court, but the very existence of a judicial structure protected soldiers from the worst excesses of martinet officers. And a court martial was essential: Joseph Wall was executed for ordering a flogging that caused the death of Sergeant Benjamin Armstrong. Deaths following flogging were not unheard of but because there was no court martial, Wall could not justify his position. A tyrannical officer like Lord Brudenell (see my last post), who held court martials with astonishing frequency, could escape censure because he followed procedure. 18 Although his great wealth and excellent bloodline also helped.

It is impossible to say how many men died from flogging, since the army’s interests were not served by recording such a cause of death. A flogging was inflicted under medical supervision; if the regimental doctor believed the man would die, it was halted. However, men still died as a consequence of flogging and when newspapers reported these cases, they caused a public sensation. 19 Even non-fatal floggings could arouse public anger, as happened when Private John Henderson received 300 lashes in Charing Cross Barracks, London. It was reported that ‘The sufferings of this man were dreadful; and his shrieks so loud and piercing that drums were beat in order to drown out the sound. The heat of the weather added dreadfully to the severity of the flogging.’ 20 Public feeling was outraged and the government decided to appoint a royal commission to inquire into military discipline.

The members of the Royal Commission on Military Punishments (1835-6) were more in favour of the status quo than reform but, coincidentally, 2 men died after being flogged while the commission was sitting. 21 Press coverage of their deaths made it impossible for the commission to ignore the deleterious effects of corporal punishment. Subsequently, the maximum number of lashes that could be awarded by a general court martial was limited to 200. However, most minor offences were tried by regimental court martial, where the punishment was restricted to 100 lashes. Even after these ‘reforms’, men died as a result of flogging. The death of Private White in Houslow in 1846 became yet another cause célèbre for anti-flogging campaigners. 22 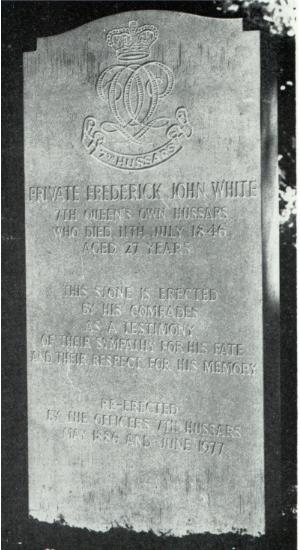 Gravestone of Private White, erected by the regiment.

The incidence of flogging declined gradually as the century wore on, but ritualised corporal punishment remained part of army discipline until 1881, when it was abolished. Execution remained a battlefield punishment into the twentieth century and debate now rages over court martials during World War I. Research has shown that executions increased just before a major offensive as officers sought to enforce their authority. 23 Even when faced with Britain’s first conscript army, the military authorities held on to ideals about exemplary discipline that owed more to the eighteenth century than the twentieth.