Over 3,000 war graves maintained by the Commonwealth War Graves Commission (CWGC) can be found in burial grounds across Ireland. But most of the dead remained where they fell, commemorated by seas of crosses in European cemeteries or by monuments to the men whose mortal remains were never found. For the majority of families, their relative’s grave was marked in a country far beyond their means to visit. Some wealthy families did commemorate their dead in local churches with windows or wall tablets, bringing memorialisation into communal public spaces. 1 Most families could not afford such expensive memorials, but the family burial plot was an appropriate space for private commemoration with a public purpose. A gravestone could articulate personal loss while also acknowledging the significance of a death on the battlefield.

In St Mary’s, Curraghkippane, a rural cemetery that is a traditional burial ground for Cork city residents, I visited 14 CWGC markers, including one to Maura O’Callaghan, an Auxiliary Territorial Services casualty who died in 1947. The war grave headstone is incorporated into the O’Callaghan family plot, which is still tended and maintained.

But the homemade, personal war grave of the Burke family is the most memorable military monument in the crowded burial ground where centuries-old stones are being superseded by contemporary and shiny black marble headstones. 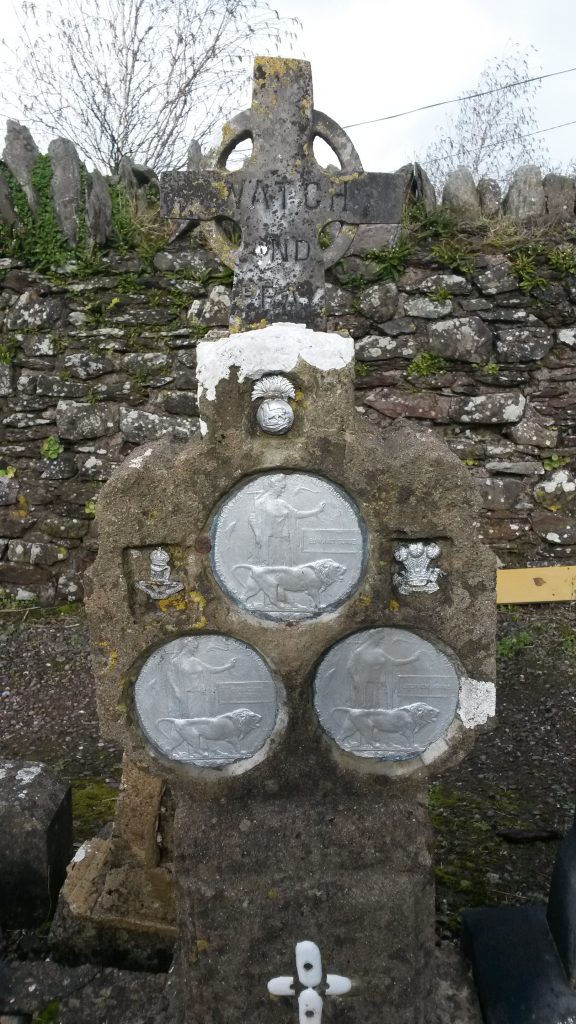 A concrete monument, topped with a stone cross inscribed with the words ‘Watch and Pray’ has been embellished with regimental badges and three widow’s — or dead man’s — pennies. These were plaques that were issued to the next of kin of World War I casualties between 1919 and 1920.  It is unlikely that those plaques are the original bronze pennies received by the family; most were safely stored in drawers, but some were mounted on church walls or in memorials. 2 I do not know whether it was common practice to integrate the plaques into family graves. Here, plaques to Stephen, Cornelius and Edward Burke were placed alongside their regimental badges. Luckily for me, the family erected another headstone next to this homemade war grave.

This is a lineage or genealogy headstone, since it was erected by a relative to commemorate his family history and may not necessarily reflect individuals buried in the plot. 3 Such headstones are found in old cemeteries, where burial plots have been in continuous use for generations.

The Burke family list on the main gravestone starts with an ancestor from the nineteenth century. It begins with Edward Burke, a soldier in the British army who fought in the defining military campaigns of the 1850s: the Crimean War (1853-6); and the Indian Rebellion of 1857, or the Indian Mutiny, as the British called it. According to the stone, two of his sons, Stephen, of the Leinster Regiment, and Cornelius, of the Royal Irish Regiment, died in World War I and are commemorated on the neighbouring cross. The final military casualty named was E. Burke, who was killed in Italy in 1944 while serving with the Irish Guards. 4 His son, Patrick, erected this monument, but the inscription omits a military casualty who appears on the adjoining monument. Who was Edward Burke of the Royal Munster Fusiliers, whose widow’s penny is above those of Stephen and Cornelius? The mysterious Edward has been omitted from the principal monument by the descendant who paid for the headstone.

This headstone tells a family history through a military lens, as the other occupations pursued by non-military men and women are not recorded for posterity. Similarly ignored are the women who married these soldiers and bore their children. A family of invisible women and martial men is a excellent encapsulation of the army’s attitude to the reproductive role of women in military life. Women were necessary to produce soldiers but were barely acknowledged as part of enlisted men’s life. For Patrick Burke, who commissioned this headstone, the family tradition of military service started with his great-great-grandfather Edward in the Crimean War and ended with his own father’s death in Italy. These two memorials celebrate unreservedly the military achievements of selected family members. Military service defines the memorialisation of this family in a more profound manner than the official, austere War Grave Commission markers ever could.