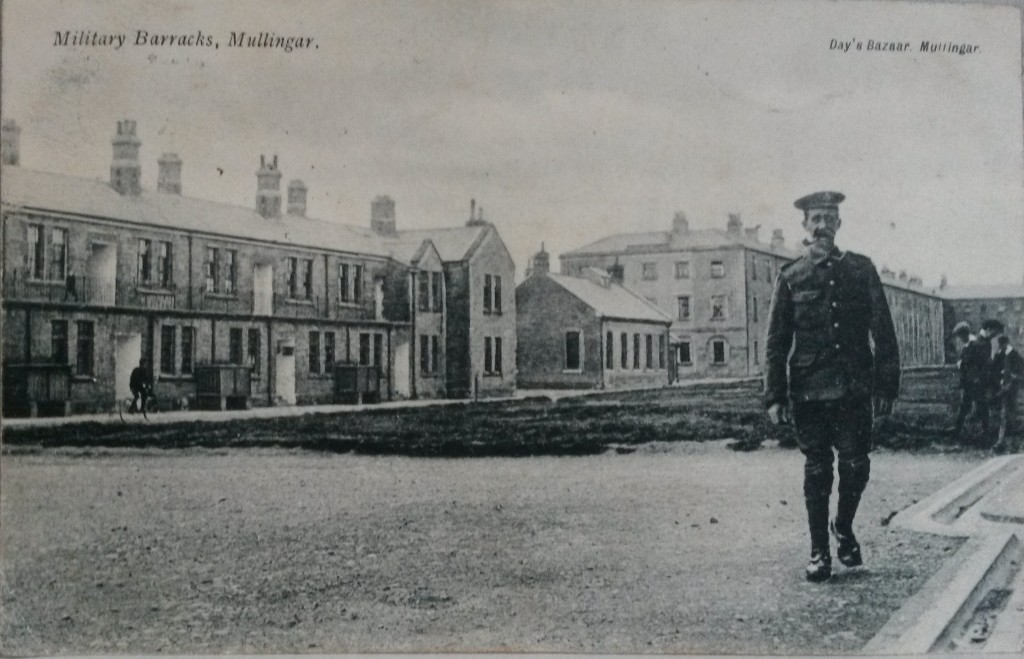 Posted in either 1906 or 1908, this postcard featuring a mustachioed soldier walking across Mullingar Barracks Square is typical of many produced in Ireland from 1890 onward. To contemporary eyes, the image is striking in its ordinariness: where is the fabulous sunset or the remarkable architecture? This picture, with children mooching around on the right-hand-side and a lone cyclist on the left, does not portray a romantic or glamourous scene. It captures a moment in an Irish provincial barracks, a place of routine and grey skies. So why was there a commercial demand for this type of photographic postcard? 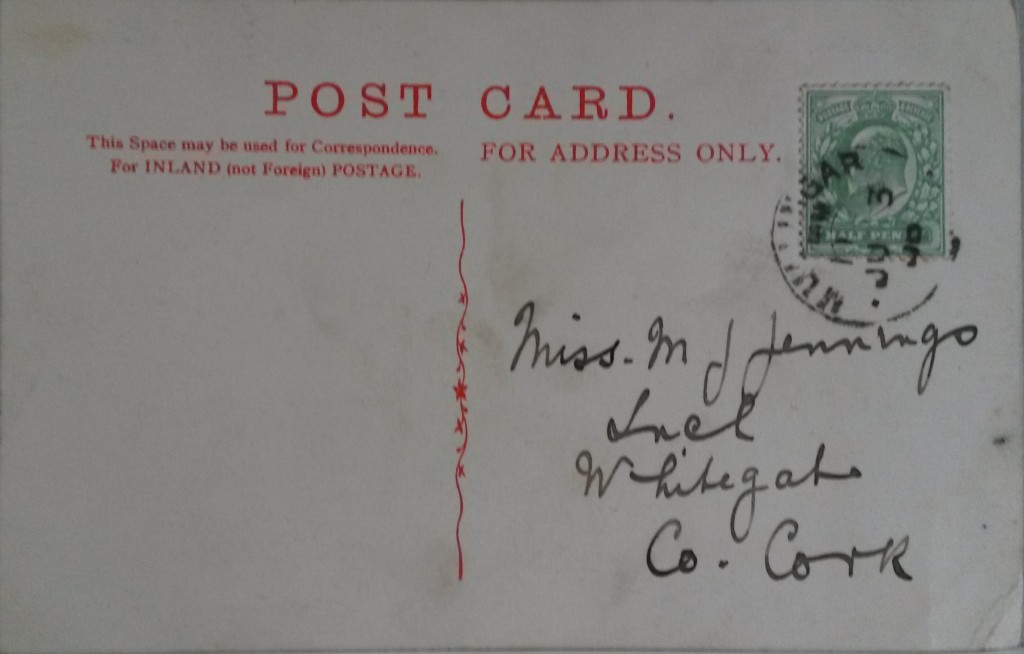 The reverse gives us a clue: it is blank because this postcard was sent to a collector, for her album. In the late nineteenth and early twentieth centuries, many collected postcards avidly, and the printing and photographic industries were happy to supply their appetites. The subjects of postcards were therefore limitless. From heart-breaking eviction scenes, to tram stations, any aspect of about Irish life could appear on a postcard. (The Lawrence Collection is the most significant Irish postcard image archive.) But, although collecting postcards was a common pastime, collectors alone could not keep an industry in business.

As Guy Atkins explains, postcards were popular because they were a cheap, reliable, fast means of communication. Their appearance coincided with rising literacy levels across Britain and Ireland. Literacy in the nineteenth-century army was a particular problem, since ordinary soldiers were from the most disadvantaged section of the population, with correspondingly low education levels. Although regimental schools existed where enlightened commanding officers established them, it wasn’t until the humiliation of the British army in the Crimea that serious administrative attention was paid to the army school system. Colonel J.H. Lefroy was appointed Inspector-General of Army Schools, and statistics on literacy in the ranks were published. In 1859, nearly 40% were adjudged illiterate or semi-literate. By 1866, concerted reform efforts reduced the figure to 29%. 1 Alongside formal army schooling, the Soldiers’ Homes established by Elsie Sandes from 1869 provided reading and writing rooms, encouraging soldiers to fruitfully occupy their leisure time. By the time picture postcards were available, the ordinary soldier was not an unlettered reprobate but a literate man with leisure activities.

For newsagents and photographers in garrison towns, the trade in postcards was a valuable one. This image is unattributed but it may have been taken by a local studio photographer. The card was sold by a local shop, Day’s Bazaar, which was founded in 1879, 20 years before the postcard craze took hold.  Situated on the main shopping street of the town, Day’s was a short walk from Mullingar barracks, and its Soldiers’ home, built after 1903. And just across the road from the Bazaar was the Post Office; sending postcards was easy and convenient for a Mullingar-based soldier.

To soldiers, these military ‘life’ photographs must have been very appealing. A soldier posted in Mullingar could send an image of his own barrack, peopled with men who looked like himself, to his friends and family. He didn’t need to describe his accommodation, the photograph showed the stark barrack blocks and vast squares clearly. Not only was his workplace and home featured, but soldiers’ domestic life was also represented. The boys in the background of this image and the child walking across the walkway of the married quarters may be soldier’s children. In addition, these photographs were brilliantly composed and executed. They were eye-catching, memorable and topical, as well as personally relevant to their purchasers. It is hardly surprising that thousands were sold.